Posted on January 31, 2012 by adluproductions

This week has really been about scheduling. Not too interesting. As I was reviewing my footage and still photographs I realized I have nothing of all three dancers together. For instance it would be nice to have a picture with the three of the dancers together on the homepage of the website. Thus, I have spent this week trying to find a time that works for all four of us. It actually wasn’t that hard, but we won’t be shooting for two weeks! And, I’m guessing it will be our final shoot. It doesn’t feel sad as of now, but let’s see how I feel in two weeks.

Posted in Uncategorized | Tagged dancers, photographs | Comments Off on Wrapping Up

Melissa and the Tutus

Posted on January 24, 2012 by adluproductions 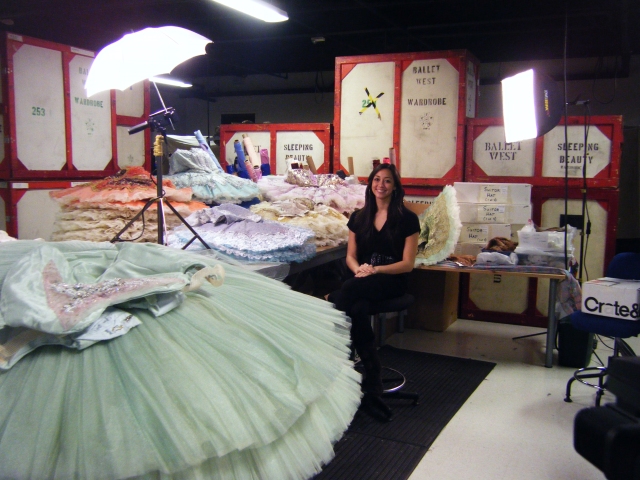 This past Saturday I went down to Charlotte to shoot the final interview. It was one of those days were everything seems to be going wrong: Melissa’s car battery died, I couldn’t find the GPS at 6:30 in the morning, and it was pouring down rain. Luckily, it was all worth it when we walked into the costume shop to find stacks of tutus everywhere. It felt like walking into a dreamland. How amazing it must be to unpack all those magnificent costumes. Not quite as amazing as getting to actually wear one, but a close second.  Well, maybe not too close. Melissa has been cast as the Lilac Fairy and she is very excited. It will be amazing to see her dance such a famous role and I believe she will really be able to make it her own. It was also the first time she saw her tutu (she is getting fitted for it sometime this week) and we made sure to position behind her so that it would be in the background of her close-up.

Having to cart around, in the pouring rain, all the equipment needed to shoot an interview did make me feel relieved to be shooting the last one. It is so much easier to grab one tripod and one camera and head out for a shoot. Once you start doubling everything and it is just you setting everything up, it becomes that much more worrisome. Luckily, the cameras have only been used by me these last few months so all of the settings have stayed as I programmed them, which helps immensely.

It has been almost a year now that I have been in production for this documentary and what I have left to shoot will barely fill the hour long tape. It seems as though this moment would never come and while I am relieved to not have to drive to Charlotte at a moments notice; it is also a little bittersweet. It has been quite spectacular to be allowed into such a special world and I have thoroughly enjoyed it. Of course, it is not over yet, not by a long shot, but as I move into post-production everything will be different. I look forward to the new phase of production as much as I am savoring the last.

Posted in Uncategorized | Comments Off on Melissa and the Tutus

A Gift From Canada

Posted on January 17, 2012 by adluproductions

I finally have the Super 8 files in my eager hands (and copied to three different drives). I am only mildly worried about mixing the negative and reversal film. They do look different, but I only have to remind myself that is sort of the point. The film is a little scratched in places, its shaky, its imperfect, its beautiful. The idea of using an imperfect format to shoot these amazing women who have spent their lives training their bodies to obtain perfection appears to be working. Not that it wouldn’t have been beautiful to also shoot them with 16 mm (more reliable) and use a tripod, but would it have felt so personal? By imitating old home movies I am hoping to remove the so-called elite-ness of ballet. Hopefully it’s working. Now, to find the perfect musical accompaniment.

Posted in Uncategorized | Comments Off on A Gift From Canada

Posted on January 10, 2012 by adluproductions

It has been rainy and foggy in Greensboro these days so I have been spending a lot of time inside. I have been doing very technical things like preparing interviews to be transcribed and organizing hard drives. Though it sounds boring it is hopefully the perfect way to ease me into an editing schedule.  Of course this is the first time I will be scheduling editing around my two-year old daughter’s schedule so we’ll see how it goes. I’m thinking I will be doing some late night editing sort of like college/grad school.

Making a film is its own balancing act and it is interesting to now add family into the mix. I wonder how my approach to editing will change, usually I just immerse myself into the footage and just start moving things around and see how they look and feel together. Within this process I am attached to the computer for hours on end, sometimes even forgetting to eat something. Now, I am planning on writing a more extensive paper edit than normal. I feel that I can work on this in bits and pieces throughout the day. Kind of like how I have been approaching the crossword puzzle for the past few weeks. I start it while eating cereal with my daughter and then sneak in 10-15 minute breaks to focus on it throughout the day. Each time I return to it after an hour or so away I have these moments of clarity where I solve multiple answers very quickly. I’m hoping this will apply as I work out the structure of the film and organize the interviews into actual storylines. The plan is to begin the paper edit this week. Exciting.

Posted in Uncategorized | Tagged balancing act, moments of clarity | Comments Off on This Week

Posted on January 3, 2012 by adluproductions

I have finally reached the end of production. Next week I will conduct Melissa’s final interview and then I will be ready to begin editing. For the past year I have been lugging cameras and various equipment back and forth to Charlotte and it seems unbelievable that it will all be ending soon. For the first couple months I had an intern to help me, but since then I have been doing it by myself. My goal (or resolution?) is to be happily editing by the end of the month. At this point I have everything captured, but need to transcribe the last three interviews (plus Melissa’s when I am finished with it). So I believe the end of January is a viable time frame.

This week I also received the Super 8 film from the transfer facility, but my drive was empty! I used to work in a post-production house so I understand how things such as this inevitably happen so I am not angry or anything, just a little frustrating. The funny thing is I have had a problem with this film on every leg of its journey. I hope that it has been worth it. I will let you know when I see the film, hopefully at the end of this week.

Posted in Uncategorized | Comments Off on Final Interview

Posted on December 9, 2011 by adluproductions

On Wednesday I traveled down to the studios to shoot Alessandra dancing the Sugar Plum Fairy. There was a little confusion about when they would be rehearsing so I ended up arriving early, which meant I was able to catch a rehearsal of “Snow.” This is probably my favorite part of the Nutcracker and was very excited to see it. I thought it looked great. The neat thing about the Nutcracker is getting to see all the students dancing. It must be so exciting for the students to get to dance among the professional dancers. I especially love the still above with Alessandra dancing in class with a student behind her. Dance is so much about handing down knowledge and experience from one generation to the next.

Usually when I am setting up to shoot I get a few minutes of people hanging out talking to each other and it gives me the time I need to set my white balance, focus, and all that technical stuff. Because the company is so busy with Nutcracker things move very quickly. Alessandra had barely told me she was about to start Sugar Plum rehearsal when the music started. I’m not sure I was even at the camera yet! I’m a little bit nervous that I didn’t get everything I wanted and haven’t been able to look at the tape yet. I guess we’ll have to wait and see if the Nutcracker makes it into the final film.

Today I returned to Charlotte to do Traci’s third interview. It’s supposed to be her final interview, but I had some sound problems with her second interview so we are going to do a re-shoot of that next week. For some reason I have had sound challenges with all of her interviews. During her first interview it started raining, which looks great visually but caused some slight sound problems. The her second interview my microphone was acting possessed and worked some of the times and not other times. For this interview we wanted to shoot in the upstairs hall of the lobby because there are some nice sculptures hanging from the ceiling that I was planning on getting in the shot. Of course, there were multitudes of mechanical sounds going on all around us so we had to move. In this instance the sound problem led to bigger and better things because we were able to shoot in the costume shop where it was nice, quiet, and visually stimulating. It felt like a good shoot and I am much more excited to watch that footage. Hopefully I’m not jinxing myself by typing that…